Why Austerity is a Lie (updated)

Austerity is a lie. Not the cuts - they are real enough - but they idea that any of this is about tightening our belts or managing within newly straightened citicumstances - that's a lie.

I find the repeated use of the word austerity very annoying. It implies that what is happening in the UK today is unfortunate - but somewhat accidental - like an act of God. But what we face is not austerity, it is a targeted assault on the rights of disabled people and people in poverty. The targeting takes at least 3 forms:

First the primary economic problem has been created by debt. But not everybody's debt is equal. It is the debt of the home owner that is the most powerful cause of the economic crisis in the UK. And this debt is the logical counter-part to the enormous economic bubble in house prices that has made some people very wealthy, put others in deep housing debt and left others outside the house ownership system altogether. As the economist Lester Thurow pointed out many years ago - inflation is always a form of theft. The problems we face are rooted in inequalities of wealth and the irrationalities of greed which nobody wants to talk about.

This graphic shows the impact of reducing the base rate of interest down to 0.5 - an extraordinary annual subsidy to the better off: 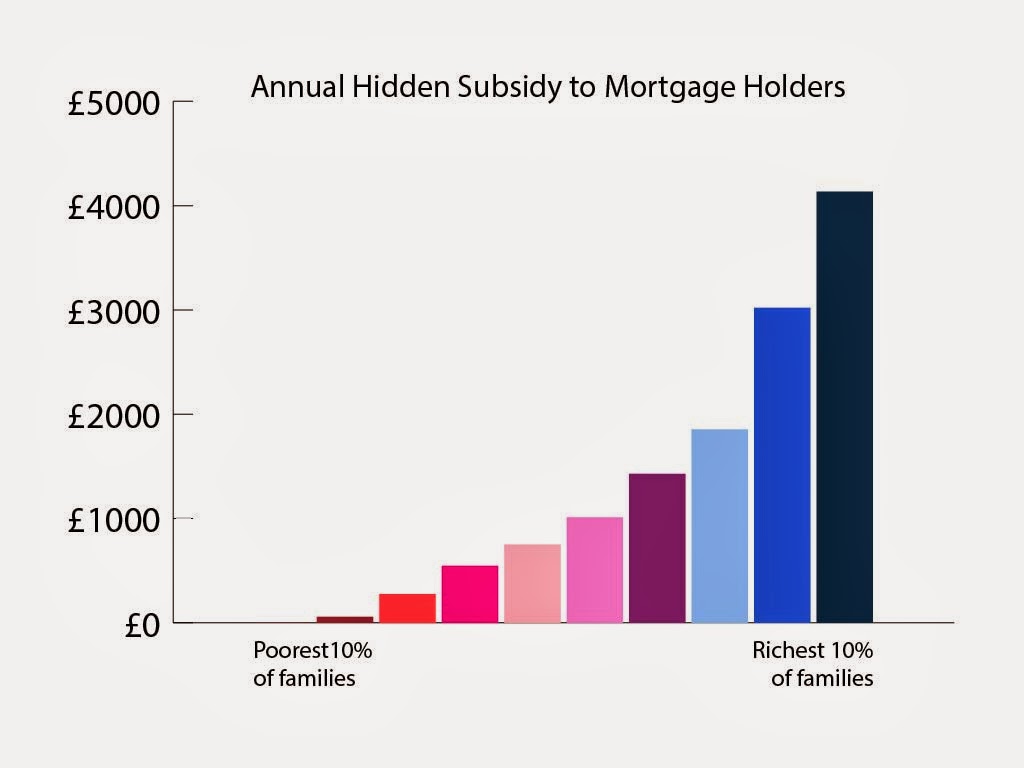 Second the government's response to this problem has primarily been to avoid letting the economic house price bubble burst. The worst political outcome is perceived to be that those people in housing debt should have to pay what they owe and that those inflated house prices should tumble. Hence these debtors are subsidised by pumping money into the banks that have made these bad loans and by trying to sustain an incredibly low interest rate - one that is killing the value of savings. The government hopes to pay for this subsidy to home owners and financiers by cutting back on public expenditure elsewhere. We are responding to a problem caused by inequality by increasing the level of inequality.

Here is the housing bubble - a 360% increase in house prices in just 11 years: 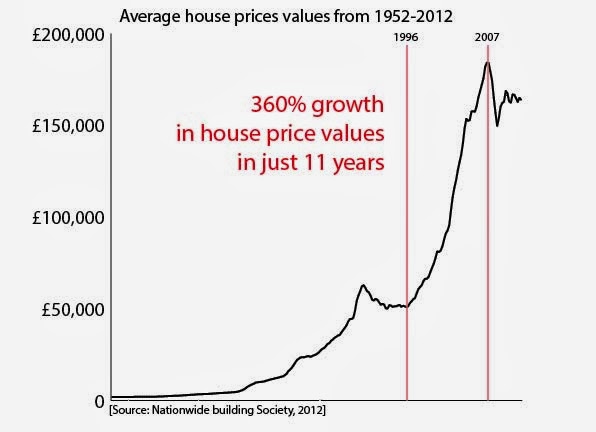 However, thirdly, the government faces the further risk that those important swing voters (most of whom are home owners) will also react negatively to seeing 'popular' welfare services cut. Hence the services that must be targeted for cutting are those that are just for the poor and disabled people. These are the unpopular, unknown or stigmatised public services - benefits, social care and vital community services for women and families. So, those who did not cause our problems must pay for their solution.

I have recently done another analysis of this:

This calculation does not even take account of inflation or the impact of increased taxes, like VAT and social care charges, that also target the poorest.

The cuts are represented in the following graph: 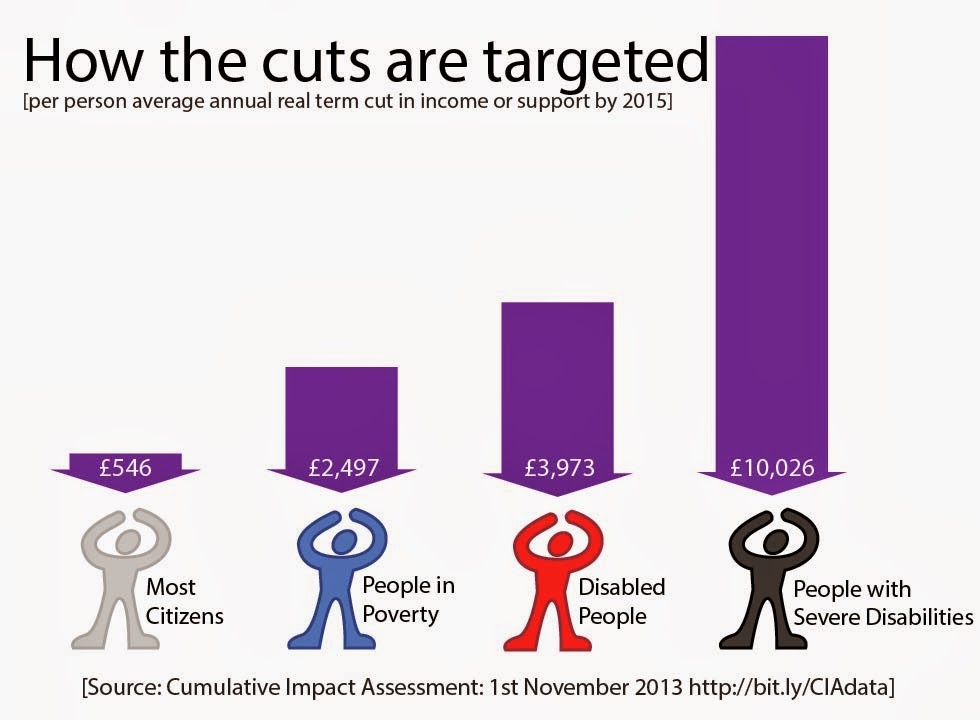 You do not need a good understanding of economics to see the madness and injustice of this approach. Inevitably, saving money by targeting the poorest with more taxes and by reducing their incomes is not going to work - they have very little money to steal - and ultimately this policy will only lead to other expensive social problems. But long-term logic is a luxury for politicians who are just desperate to win the next election - at any cost.

Another way of identifying the real meaning of our current situation is to remember the marketing maxim - if your product has a weakness then pretend that it is a strength and positively promote it. So we have the rhetoric of the 'squeezed middle' and the 'welfare lifestyle'. Politicians invert reality and distort truth in order to fabricate reality into a more electorally satisfactory form. Or, as Joseph Goebbels supposedly put it: If you tell a lie big enough and keep repeating it, people will eventually come to believe it. [Interestingly this quote is probably not authentic; and it certainly seems implausible that Goebbels would reveal his own strategy - nevertheless his strategy was certainly effective - for a time.]

Of course, if austerity were just some kind of accidental or shared social problem - not a politically designed strategy that targets the most vulnerable - then our response would also be very different. If we were simply making up for some accidental shortfall in the public purse then we could either (a) increase those taxes that fell equally on everyone (e.g. income tax) or (b) reduce the cost of public services by asking everyone to take a small pay cut. It is interesting to notice that the groups that benefit from this targeting strategy are not only the better off - they also include many who are in the middle and who are being encouraged to blame the poor for poverty

One of the challenges for those of us in the Campaign for a Fair Society is to try and get people to understand that the unfairness of these cuts lies not so much in their severity but more in the way that they target those with the least ability to defend themselves. It is for this reason I think we should all refuse to use a word like austerity. We must not allow language to be used to distort reality - we must underline the choices that are being made by our political leaders. Even if this means that people will also have to accept that many of the problems we face are very much of our own making.

So instead of cuts, austerity, the recession or other misleading terms - remember - what we face is the targeting of disabled people, the targeting of the poor, and the purposeful creation of greater inequality.

You can read more on how cuts target disabled people in our latest report - A Fair Society?