A Socialist Response to Austerity

Barnsley offers us hope of a community that commits to equal citizenship. Austerity has been severe and unjustified and it has targeted the poorest people and the poorest places. It has also targeted local government. For instance, Barnsley saw its funding fall by 31% in 5 years, and these cuts have continued.

Austerity must be rejected, fought against and overturned.

But what do you do in practice if you are victim of austerity - like local government - and you are expected to pass on the pain to local people?

Often the only feasible response to this challenge has been to cut costs and to cut services, starting with anything that does not seem essential. Preventative work is the first thing to be sacrificed; this means the long-term impact of austerity will be to make local government less efficient: Instead of solving problems cheaply upstream more money must be spent on more expensive services downstream. Cost pressures increase on care homes, hospitals and prisons as local government can no longer help people to stay home or to stay out of trouble.

This is not just a financial challenge, for strong Labour authorities, like Barnsley austerity is also a philosophical challenge. For many years socialism has been identified with increased spending on public services, and so, making cuts to public services feels like a betrayal. However a recent report, published by the Centre for Welfare Reform, Heading Upstream, reveals that Barnsley has found a very different way, a socialist way, of responding to austerity.

This is not exactly a new idea.

The welfare state was not created out of nothing in 1945: much of it had already been developed by local authorities, trade unions and cooperatives in the preceding decades. Ordinary people, often working with local government, had developed a range of locally organised self-help solutions, including hospitals, cooperatives and local community services, to help people live better lives.

Socialism is not limited to government spending; at a deeper level it is a determination that we help each other and that good help means helping people to be citizens, to live with freedom and respect, to make their own unique contribution to the life of the community.

Socialism is about people, not money.

This is something that local councillors and officers in Barnsley understood before austerity began. For instance, Barnsley had been a leader in the personalisation of social care services since 2005. Now 97% of those eligible use a personal budget to manage their adult social care. Barnsley also pioneered the Future Jobs Fund, where support for people out of work was organised locally and in partnership with local business. Even the DWP was forced to recognise that this project had been far more efficient than its own failing centralised Work Programme.

More recently Barnsley began a more wide-ranging shift in its culture and organisation. As their Chief Executive, Diana Terris explained:

What is required is a cultural shift, from a paternalistic ‘What can I do for you?’ to a partnership and an exploration of ‘What can you do?’

From 2013 Barnsley has seen a wide-ranging organisational changes which have touched everyone from councillors to front-line workers. Critically Barnsley realised that the necessary changes could not be made from within the Town Hall. The Council has embraced the many smaller communities that people really feel a part of and it has changed its governance structures to push planning and spending down towards the level of the local ward.

This strategy has also been combined with a significant focus on citizenship and community volunteering. Spending on local developments must at least be matched by what people bring themselves. For instance, the Council contributed £10,000 to a £74,000 project at Milefield Community Farm; the rest of the funding came from local people, local businesses and other public services. As Leader of Barnsley Council, Councillor Sir Steve Houghton CBE put it:

…we’re tapping into something out there that’s been around for a long time. People are proud of their villages and their towns and communities. People are prepared to do more, if they are given the chance. So now that is what we are trying to do, and the response so far has been absolutely incredible.

Critically Barnsley have put their Councillors on the frontline of these changes. Many decisions are now made in partnership with local people, in local Ward Alliance meetings. Local councillors are more focused on the direct impact of local spending on their own patch and empowered to hold people to account. Councillors work in partnership with the community development team to keep building local capacity.

This not the vapid Big Society. This is an intentional partnership between the state and local people to make Barnsley a better, stronger and fairer place. Local leaders are very aware of the underlying structural inequalities which persist. For instance the report calculates that the centralisation of power, costs Barnsley about £0.75 billion per year, about 40% of all local public spending, and equivalent to more than £3,000 for every citizen of Barnsley. What is more Barnsley Council only controls 11% of local public spending. 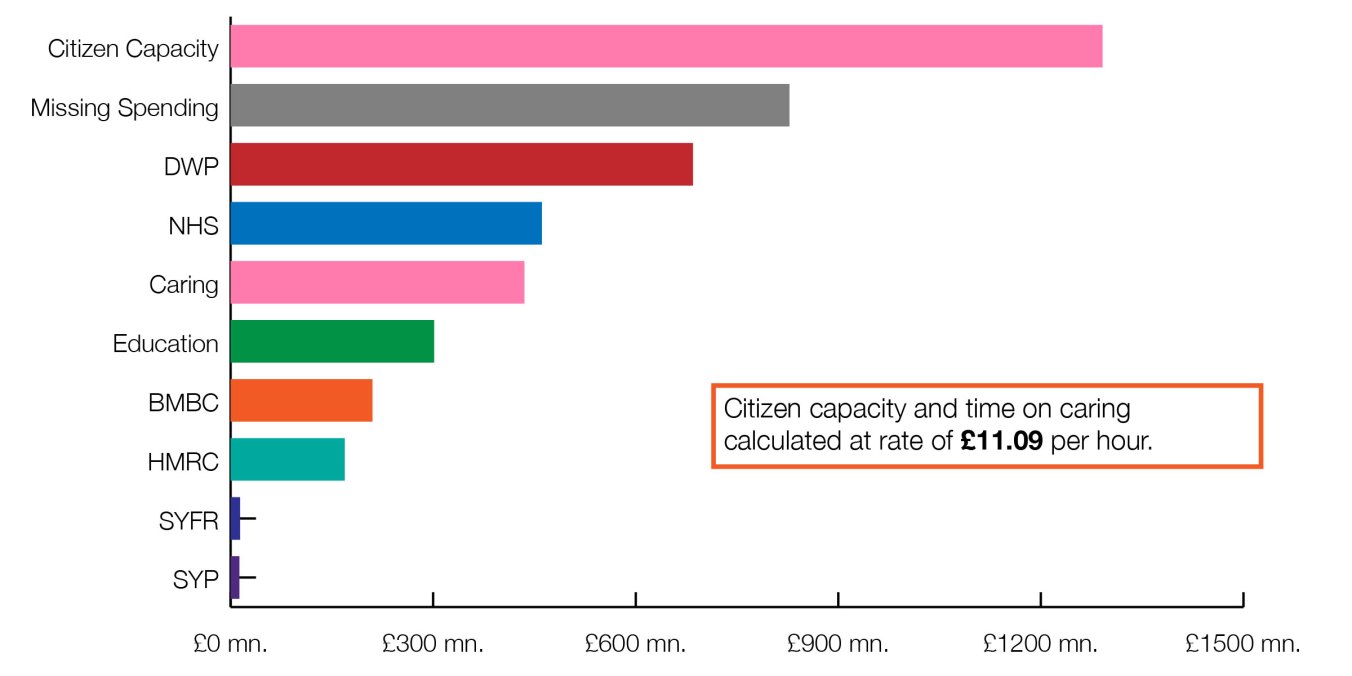 But we can also calculate the enormous positive contribution already made by citizens as carers, which is £435 million. Further, we can also estimate the latent capacity of citizens at £1.3 billon. In other words citizens can contribute directly just as much  as public services combined.

This raises important questions for future Labour Party policy: Austerity is the enemy - but it is not the whole enemy. Complacency, paternalism, elitism and injustice are also part of the enemy, and if we cannot begin to challenge these then I suspect that spirit of austerity will eat away at our shared lives like a cancer.

Just down the road from Barnsley, in Sheffield, some of us are now gathering to explore what this means for us. Surely we can imagine a new kind of local democracy - where local people have control over their own communities and where people are at the heart of making their collective lives better.

Globally Citizen Network is asking the same question: May be now is the time for us to put aside our differences and work together build a better world?

Who can hold us back?