I was recently asked by the Almeida Theatre company to answer a few questions about myself and my view of the government's welfare reform programme.

1. Could you tell us a little about yourself and the job you do?

I am the Director of the Centre for Welfare Reform, which is an independent think tank, formed in 2009, to try and develop ideas and policies to strengthen and reform the welfare state. We believe everybody matters and work to help build a world which values human diversity and where we treat each other as equals. The Centre mostly relies on voluntary efforts from citizens to research and share good ideas or to examine policies and injustices. Personally I split my time between research, writing and helping people solve social and system problems.

2. Could you tell us (assuming we know nothing about it) how collective cuts are impacting the lives of disabled people and how they are being targeted by the government?

When the Coalition Government came to power it announced a series of cuts across most areas Government, although largely protecting pensions, the NHS and education. These cuts were particularly severe in two areas: Benefits and local Government. What the Government did not say, but which anyone who understands the basics of Government finance would know, is that severe cuts to benefits and local government will directly impact disabled people:

3. Could you tell us a little of the difficulties that disabled people may face when using the job centre service?

The current system is very complex and many people don’t even know that they are entitled to any benefits because of a disability.

If people are aware that they might be entitled to support they need to get through a complex benefit system where entitlements vary because of a whole range of different factors: age, impairment, income, family status, previous employment status.

If people are told they are not entitled to support or if the system just seems too off-putting then many people simply won’t claim money they are entitled to [approx £17 billion is never claimed].

If people do claim then the process of assessment can be very negative and harmful.

If people feel they have been treated unfairly its very difficult to appeal.

Once people are deemed to be entitled to support they can then become part of a Work Programme which may sanction them. The Work Programme has so far given more sanctions than real jobs.

Overall the whole process is depressing, stigmatising and underlines a sense of unworthiness.

4. What is ESA and how are disabled people affected by sanctions?

ESA is the benefit that you get if you are unemployed, disabled and without any other source of income. ESA stands for Employment and Support Allowance and it replaced another benefit called Incapacity Benefit. This benefit has been chiselled away over the past 6 years. Disabled people confront sanctions in a number of different areas:

5. What is the purpose of a benefit sanction?

Benefit sanctions are meant to make people compliant with the DWP and its private contractors plans and objectives. They are punishments, taking away benefits, for failure to follow ‘the rules’. There are many examples of these punishments (against which you cannot easily appeal) being imposed for obviously stupid reasons.

6. Our play is about poverty and it’s affect on people. Could you explain how and why people on lower incomes are being targeted by the government?

This is a big question. In brief I would say the reason that people on lower incomes are being targeted would be as follows:

7. Social and financial inequality is at the highest it’s ever been - why is this and what do you think it points to in the future?

In addition to all the points above there is the problem that the world is changing in other unpredictable ways - climate change, technological change, growing debt (which is just a special kind of socially constructed inequality). Often we don’t know what we can change, what we can protect and what is worth fighting for.

Since the development of the welfare state we have often entrusted what is important to government and to politicians and hoped that they would ‘do the right thing.’

Sometimes they have, often they haven’t.

Strangely I think that - after the development of the welfare state and after the cold war - we somehow managed to forget what we were fighting for during the turbulent twentieth century, which was: equality, rights and democracy. Now we seem to have gone to sleep and we expect some mysterious powerful elite to take care of us.

For me the question is whether or not we will wake up and start behaving like citizens: people who take our responsibilities to each other seriously.

If we do not then small problems, that are essentially easy to solve, will grow into cancerous problems that will overwhelm us. We are the key to our own future.

8. How has the bedroom tax affected the lives of people in this country either living with a disability or without?

The bedroom tax is just one other unjust attack on the incomes of the poorest. Its impact includes:

Essentially the bedroom tax symbolises our deep disregard for community - we can now be ‘priced out’ of our own place, our own history. Local government is not answerable to us - but to the money invested in our homes. 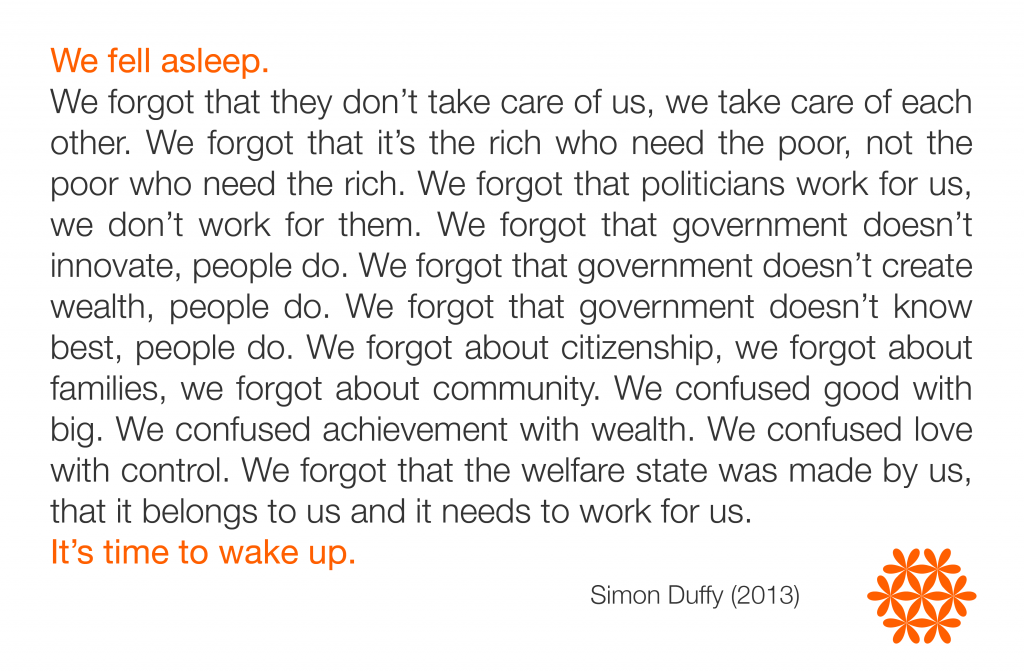