There is a stark contrast between promising reforms in Australia and radical reversals in the England. I have just returned from 3 weeks in Australia where I have been working with disability advocates, families and support organisations. The question we were exploring is how can we best support our own active citizenship and the citizenship of others. I was also able to be part of the launch of Citizen Network Australia in Perth and it was fantastic to hear people’s enthusiasm about building a global movement for citizenship for everyone - for a world where everyone matters.

The trip was also a chance to reflect again on the development of NDIS. Australia’s National Disability Insurance Scheme (NDIS) is without doubt the most exciting, most ambitious and most perilous attempt to reform disability support and to bring it in line with human rights and the principles of independent living. All around the world, we have a stake in this reform, because no other country has been brave enough to introduce such an important reform.

This is brilliant - if Australia achieves this it will have moved itself from the back of the pack in disability rights to become a true world leader.

This is in stark contrast to my home country, England. Similar reforms in England, which began with the Independent Living Fund (ILF), Direct Payments and then Personal Budgets all promised much in terms of increasing people’s level of control over their own support. However these achievements pale into insignificance alongside the vicious means-testing and the severe cuts that began in 2009. There are 700,000 fewer people now getting support than in 2009, a drop of about 40% - and these problems are only getting worse. The United Nations has severely criticised the UK for its failure to respect the human rights of its own citizens, and their criticisms are entirely justified. Social care in England remains a ‘Poor Law’ service - a poor service, for the poor, that keeps you poor.

We have still not learnt that genuine and positive reform is possible; but it begins by bringing together people with disabilities - all disabilities - families and support organisations to campaign and to explain - not so much to Government - but to the general public - why a right to disability support (what England calls social care) is a fundamental human right. I continue to work with the Socialist Health Association to encourage the Labour Party to develop a more positive and ambitious vision. I am extremely grateful to the Australian disability movement for showing us the way ahead - we just need to follow them.

However there are some major challenges ahead. Having a plan is one thing; putting that plan into action is something entirely different.

I was in Australia when the details of NDIS were first announced and I met with the design team - the civil servants charged with defining how NDIS was to be delivered. My analysis, which I went on to publish (with my usual tact and diplomacy) was that the design of the system was very poor indeed. There remains a severe danger that the system will become enmeshed in centralised bureaucratic controls that undermine the basic human rights that NDIS aims to respect.

Moreover, many of my friends in Australia are the people who called for these reforms and who continue to work to innovate and improve the system so that disabled people and families are put in charge of their own lives. They are now on a rollercoaster of emotions as they see enormous progress in some areas, matched by the development of systems that seem damaging or just plain peculiar. You can read a moving story from one woman’s perspective here.

It would be tempting to say “I told you so.” But I don’t think that’s the appropriate response, and my last visit to Australia has left me much more encouraged than down-hearted.

First of all Australia is living up to its promise to properly fund NDIS and this is no small achievement. Second, while many of the detailed systems do seem crazy, they can all be resisted and reformed. In fact even more encouraging than the progress around NDIS is the continuing sense of passion and determination amongst Australian advocates and disability leaders. They know that they can achieve so much more and they know that they can - despite all the obstacles - make the system accountable. Disability advocates have been able to achieve more change and have created more transparency than in any other countries that I am familiar with, including: England, Scotland, Finland, New Zealand and the USA.

What is more, I see increasing signs of collaboration between different kinds of disability advocates around the issue of genuine choice and control. For example, Vicserv has pulled together a wide-ranging alliance of disability leaders to explore how to define good practice in self-directed support. Likewise the Self Direction Collaboration Network brings together a range of brilliant advocates, leaders and facilitators for shared work on turning the dreams of NDIS into practical reality.

The challenge may be to simply to hold one’s nerve and to holdfast to the original intentions of the NDIS. The current system is changing and evolving in such a fast, complex and unpredictable way that it is easy to be mesmerised by it. When it does crazy things that don’t make sense then its natural to be disappointed and angry. But it is possible to fight-back and often it is possible to work around the problem.

I was struck by how the innovative organisations that I worked with in Western Australia, like Avivo and My Place, were also having to remind themselves that they’d already spent decades working around the rigidities of poorly designed systems. The capacity to respond creatively to bureaucratic rigidity hasn’t disappeared simply because the funding body has changed from the State to the Federal government.

It is important to remember that important changes and innovations do take time and that NDIS involves at least two distinct innovations, both of which are at different stage of their evolution. Innovations evolve over time and go through distinct stages as they (and if they) evolve. Partly NDIS is introducing a model for calculating need, and ensuring everyone gets a suitable package of support. This is priority for the system, and this is moving into the stage of mainstream implementation - Stage 3. 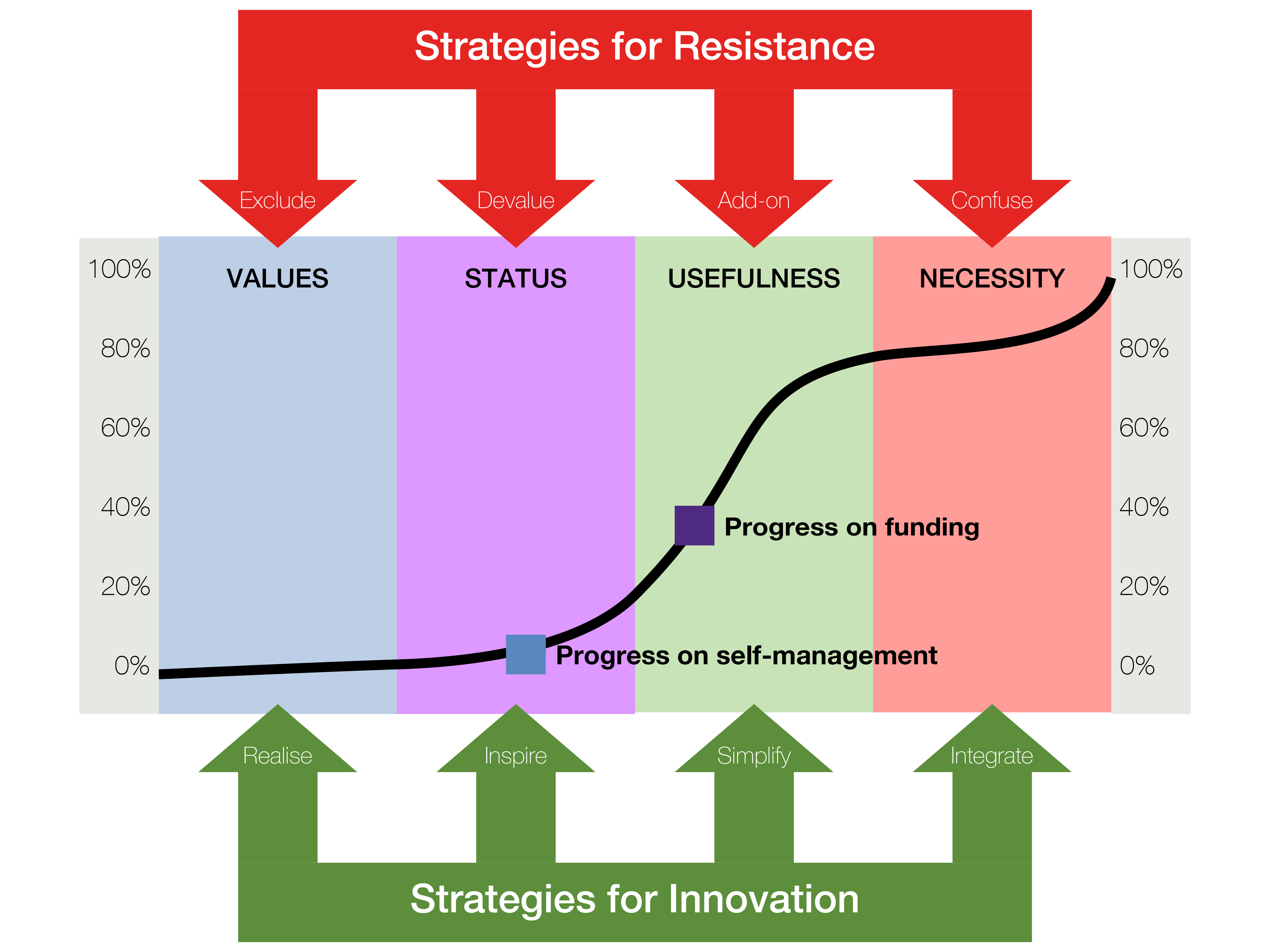 Where NDIS is on the innovation curve

But NDIS also promises flexible funding that people can control and here progress is at much more primitive stage - at best early Stage 2. This may seem disappointing, but it’s important to recognise the reality of how these kinds of changes take. Individualised funding began in the 1960s (in California) and the first UK models began in the 1970s. When I first came to Australia and talked about individualised funding in 1999 everyone looked at me like I was crazy. When I next came back in 2008 I found handfuls of people and families who had got self-managed supports, but they had been told not to tell anyone - they were ‘State secrets’ - in theory not allowed, and if you talked about it you might have it taken off you. Today the idea of personalised support and self-management has been normalised - although the reality is a long way behind. This is how progress happens.

I left Australia, not only encouraged, but also thinking that there is much more we could do to work together globally. The battles in Australia are the same battles that we’re facing in other parts of the world. In each country, where people have been inspired by the desire for citizenship, equality and inclusion, then people and families have been able to find a way through to create better support solutions. Countries can learn from each other, advocates can help each other, we can share the lessons we learn to speed up the process of change. For instance, we might be able to use Citizen Network as a global alliance; we can start to share examples of the very best practice to feed our courage and strengthen our confidence.

We launched Citizen Network in November 2016 and already there are 10 countries who with national coordinators and hundreds of people and groups have joined as members. It is still early days, but we have all the reason in the world to work together for a better world, where everyone matters, where everyone can become a full citizen. Why don’t you join us?